Mothergone, a paper collage I made this summer, will be among the works on view in Loss, A Virtual Exhibition, throughout September.

The noted Chicago art gallery, Woman Made Gallery, is presenting this show, which is happening exclusively online all month. It runs September 4 through 27, 2020.

The gallery’s board decided to take a creative approach in the face of 2020’s health and distancing challenges by creating a special series of three opportunities for artists to connect and support each other online through virtual exhibitions.

The first show in this virtual series explored the concept of touch and how elusive (and necessary) this once common human pleasure became during this difficult year.

Participating artists hail from the US as well as Austria, Canada, Great Britain, Greece, Italy, Nigeria, and Turkey.

Artworks span a wide range of media, from painting, drawing, and printmaking to mixed media, collage, and sculpture to photography, digital work, and video.

Every piece explores the concept of loss, and each responds to the question “How has loss affected you?”

Juror and curator Felicia Grant Preston, an art instructor and visual artist, asked artists to reflect on this theme even as she has explored and experienced it in her own life.

Grant Preston lost three loved ones (her husband and parents) over the past eight years, and these partings devastated her. Since the global health situation changed late last year, she also has lost people she loved to the coronavirus.

Every Loss Is Individual

“Every loss that we experience is individual,” she said. “How we navigate through it is also a varied experience. Those around us may try to comfort us in various ways but often don’t know what to say or do because we all experience grief or loss in different ways.”

Although many people think of death when the concept of loss comes to mind, Grant Preston emphasized that loss “is not just people.”

The artwork in Loss, A Virtual Exhibition testifies to loss’s varied manifestations in this time of history.

Hearing about the show inspired me to make new art specifically related to loss.

Unlike her experience, however, mine has been highly compressed. Over 17 months, my husband and I lost 15 people significant to us.

This heavy period of intense loss began with my father’s death in January 2019 and included the loss of my husband’s father in September 2019. Other deaths occurred between these major losses, and the pattern of endings continued through May 2020.

During this period, we attended 13 funerals. Of those, we ran or participated in eight. Death became our everyday work in a relentless round of shocks, sudden change, and hard work that took not just a physical toll but an emotional, mental, and spiritual one.

The Loss show became a lifeline for me and my for my art.

News about it came just as this concentrated series of deaths was ending. With all we had experienced, I knew I had to express my feelings somehow in new work that could be part of Loss, A Virtual Exhibition.

I ended up making a powerful piece that summed up the devastation of my 17 months as death’s handmaiden.

That’s not the piece chosen for the show, however. (I submitted three works, of which Grant Preston chose one.)

Back To The Original Loss

Instead, she selected another new piece, which you can see at the top of this post.

This piece expresses the original loss that began my life. For I was born into loss when my mother died at age 36 while giving birth to me and my sororal twin.

That dramatic, simultaneous entrance and exit haunted much of my early life.

My father remarried in less than a year, as his four children needed a mother. Three more children soon arrived. Although my stepmother was the only mother I actually knew, I felt the loss of my biological mother keenly.

The four of us born of my mother learned quickly she was a taboo subject. My father, especially, didn’t want to talk about her, and I believe he continued to grieve for most of the rest of his long life (he died at 98).

After childhood, I was able to meet my mother’s extended family. Also, I took many steps to help myself heal from this original loss. Yet even now, at age 60, I feel the lack of my biological mother, even if it doesn’t hurt the way it did as a child.

With my father’s death in early 2019, however, this wound reopened.

And it demanded attention as person after person important to us followed my father into death in the months afterward.

When Woman Made Gallery announced the Loss show and called for artists to submit work, the timing finally was right to look again at my mother’s death and express how I feel about it through art.

The seed for Mothergone came to me only after my father’s passing. Ironically, it arrived courtesy of my stepmother’s family.

One of my stepmother’s brothers has delved into his ancestry. Along the way, he researched the extended family, including my father and my biological mother.

We connected shortly after my father’s death, and this man sent me various items he’d found in his research. Among them was the obituary for my mother, which appeared in the Chicago Tribune.

All my life, I had wanted to know when and where they held her wake and funeral. Growing up, we weren’t allowed to ask, and after childhood, when I felt safe to ask extended family members, their memories were hazy. Now, there is nobody we can ask anymore, as all the prior generation has died.

So it was an unexpected gift to receive the death notice, finally, in 2019.

The obituary told me so many details I would have liked to know as a child. I’m glad to learn them now and see them with a 60-year-old’s eyes.

Here’s what I learned:

Given all these new facts, I decided to make the obituary part of Mothergone.

I enlarged the obituary image and added it repeatedly to a word processing document.

Enlargement made it blurry, which felt perfect to me because type on newsprint often looks a little blurry because of the paper’s softness. Also, the lack of sharp focus indicates how long ago this loss occurred and communicates the feeling and idea of memories, seen through a haze and felt as blurred remembrance.

While the obituary carries important information, it’s essentially background or a kind of “memory wallpaper.”

The photos tell the tale.

They show how I felt, and feel, about losing my mother (and losing out on even knowing her).

She grew up in rural South Dakota in the 1920s and ’30s, and I have a photo taken at her high school graduation. I used this black and white image to convey how devastating her loss became for everyone.

After printing the image and cutting out her face and shoulders to eliminate any background, I tore her picture in half. Each half has a jagged edge that’s turned up, almost sculptural. That tearing and the two halves indicate the rupture of her loss, the fact that life before her and life after her were two utterly different times and experiences.

I have only one photo from my time as a baby, and I photocopied it and placed it at Mothergone‘s center, framed by the two ripped parts of my mother’s face. I’m sitting on the left, with my sister leaning on me.

Only in making this collage and writing these words have I realized how much anger her leaving aroused in me. Loss and grief aren’t only about sadness – there’s white hot rage at being left. There’s also resentment about having to be the strong, upright one others lean on.

I Will Never Know Her

I will never know her, this woman who gave birth to me.

And yet her presence remains powerful, and she has affected so much of my life.

This year’s intense season of loss reopened this old, deep wound and helped me see just how bad it was…is. If I allowed it, anger could resurface easily at any time and potentially crowd out other, finer emotions, but I will not allow it.

It’s enough to know it’s still there, allow its expression artistically, and then let it go. I realize it’s part of the grieving process, and I believe it’s a source of personal strength.

Reckoning With Losses Old And New

Creating Mothergone has been a journey deeply into myself to reckon with losses old and new.

Allowing myself to feel so much anger and convey the experience to others through art has allowed me to navigate the relentless series of losses I endured in such a brief time in 2019 and 2020.

As I reclaim my life and work to restore my health and well being in the wake of such a difficult time (and during the very challenging period we’re enduring globally), I know that making Mothergone means I’m farther along than I would have been otherwise.

I’m grateful for this opportunity and to Woman Made for sparking the creative impulse that turned out to be a healing journey.

Loss, A Virtual Exhibition is available for viewing online.

Woman Made Gallery’s website page has details about the show.

To see all the work (including Mothergone), go to the full exhibition page.

To see my piece, go to the page for Mothergone. Besides an image of this paper collage, you’ll find the artist statement I wrote about it for the Loss show.

NOTE: Add a comment below if you wish. Share your thoughts about loss as well as my Mothergone collage and the exhibition. 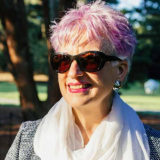 Anne Nordhaus-Bike is a painter and mixed media artist working in Chicago.